Are you a curious person? An over-thinker? I am. Have you ever put thought into what your VIN (Vehicle Identification Number) means?

The VIN is specific to an individual vehicle, like a finger print is to a person. No other will ever be the same.

It is 17 digits long with a combination of letters and numbers that each has their own meaning that makes it unique for that vehicle. The standardization wasn’t familiarized to VINs until 1981 and earlier vehicles are only a serial number. Over time, more data has been put into VINs but what information is carried in a VIN is primarily left to the decision of the manufacturer. 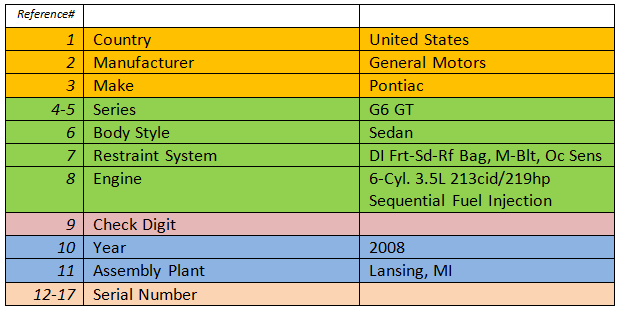 The first three digits make up the World Manufacturer Identifier. Reference one signifies the final point of assembly. Cars made in the U.S. starts with a 1, 4 or 5. Canada is 2, Mexico 3, Japan J, South Korea is K, and England S, Germany is W and Sweden of Finland is Y.

Reference two tells you about the manufacturer. In some cases, it’s the letter that begins the manufacturer’s name. For example, A is for Audi, B is for BMW, G is for General Motors, L is for Lincoln and N is for Nissan. But that “A” can also stand for Jaguar or Mitsubishi and an “R” can also mean Audi. It may sound confusing, but reference three links it all together.

Reference three, when combined with the first two digits, defines the vehicle’s type or manufacturing division. In our example, 1G2 means a General Motors Pontiac. 1G1 means Chevrolet passenger cars and 1GT means GMC trucks. There have been many variations on the World Manufacturer Identifier as brands have come and gone. This Wikipedia page has a list of WMI codes.

References 4 through 9 make up the vehicle explanation section. References 4-8 describe the car with information such as model, body type, transmission type, and engine code and restraint system.

Reference 9 the “check digit” is used to detect invalid VINs, based on a mathematical formula that was developed by the Department of Transportation. 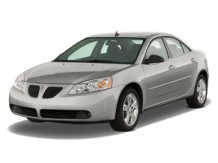 Reference 11 indicates which manufacturing plant that the vehicle was assembled. Each automaker has its own set of plant codes.  The last 6 digits (reference 12-17) are the production sequence numbers. This is the number each car receives on the assembly line, almost like a social security number to a person. With the example I used with the Pontiac G6, it was the 176,212th car to come off of the assembly line in Lansing, MI.

You will need the VIN when you are registering your car, purchasing insurance which the VIN is the primary determining factor to your rate, or when it is being repaired by a mechanic so he/she car order the correct parts. It is used by the police if your vehicle is ever stolen and also if you are shopping for a used vehicle, you will use the VIN to run a history report.

Visit our website for more information about Auto Insurance or to obtain a quote, https://www.barrsinsurance.com/personal-insurance/auto-insurance/