Remember on Memorial Day and Everyday

Home >Blog >Remember on Memorial Day and Everyday
No responses 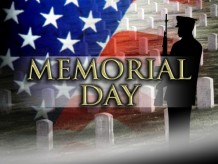 Originally called Decoration Day, the last Monday of May, became legally Memorial Day in 1967 to honor fallen servicemen and women.   The official birthplace of the holiday was declared by the federal government in 1966 in Waterloo, NY, which first celebrated the day on May 5, 1866.

However, Boalsburg, PA claims that in 1864, women from the town put flowers on the graves of their dead from the just fought Battle of Gettysburg and then a group of women the next year decorated the graves of soldiers that began the tradition.

After the Civil War, General John A. Logan, commander in chief of the Grand Army of the Republic, called for a holiday commemorating fallen soldiers to be observed every May 30th.  However, in 1971, due to the Uniform Monday Holiday Act, Memorial Day was moved to the last Monday in May to ensure long weekends.

In December of 2000, Congress passed a law requiring Americans to pause at 3 PM local time on Memorial Day to remember and honor the fallen.

According to AAA, more than 36 Million people will travel at least 50 Miles from home on Memorial Day. Per AAA estimates, the highest since the recession. 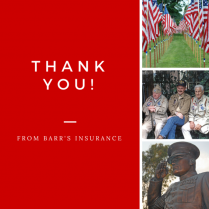 Barr’s Insurance wants to wish you a safe Memorial Day Weekend. Enjoy your families, stay safe and be sure to say “Thank you” to all men and women you meet who have served or are serving currently to protect our homeland.