Guidelines for Flying the Flag

Home >Blog >Guidelines for Flying the Flag
No responses 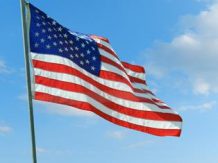 Celebrating and honoring our nation’s veterans can be done by displaying the American flag.

Here are the guidelines for flying the flag:

o   When: You can display the flag outside from sunrise to sunset. If you want to fly it after dark, it will need to be lit. Don’t fly the flag during inclement weather, unless it’s an all-weather flag.

o   On the porch: The union of the flag–the blue section with white stars–should be placed at the peak of the staff unless the flag is at half-staff. When the flag is suspended from a rope on a pole extending from a house, the flag should be hoisted out, union first, from the building.

o   On the wall or the window: When the flag is displayed on a flat surface like a wall, the union should be at the top left.

o   On the street: The flag should be suspended vertically with the union to the north in an east and west street or to the east in a north and south street. The flag should never touch anything beneath it, so make sure it’s hoisted at the proper height.

o   On a vehicle: The staff should be fixed firmly on the right side of the vehicle. Do not drape the flag over the hood, top, sides, or back of a vehicle or a boat.

o   Half-staff: During periods of mourning, it is common to see the flag flying at half-staff. Only presidents can proclaim such periods for a national remembrance . Governors can also declare mourning periods at a local level.

In some cases, heads of federal agencies can order the flag flown at half-staff on grounds under their supervision. Traditionally, states and local governments follow the president’s proclamation during a period of national mourning.

Take care of your flag!

Store it in a well-ventilated area.  If it gets wet, make sure it’s completely dry before storing it.

If the flat is damaged or worn out, it should be burned and disposed of with dignity.  The local American Legion or Veterans of Foreign War chapters may also do this for you on June 14th, which is Flag Day.  Check with you local chapter.

Show your pride in our military and our country and fly your flag!