Cooking Diakon with Jason and Ali

Home >Blog >Cooking Diakon with Jason and Ali
No responses 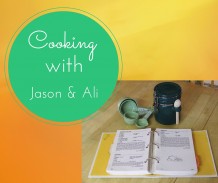 My girlfriend, Alisha, and I decided to start eating healthier, but we wanted to make it fun and different.  So we decided that each week we would pick a new vegetable that we’ve never had before and see if we could make it into a great dinner.  So each week I will post an update on our culinary experience’s taste, ease of cooking and cost (surprisingly inexpensive!).  Hope you enjoy!

To start our week off with our new healthy plan of eating, we decided to stop at Wegmans since we were in Erie.  They have the most robust selection of vegetables which includes many things we’ve never heard of.  Ali wanted me to start us off with the first choice and I decided to go with diakon – it sounded cool and I know it’s been used on Chopped a few times…so what the heck let’s start with that plus Wegman’s had a great price on them too!!  The daikon is a root vegetable, like a radish, well actually it is a radish from southeast Asia.

Ali immediately jumped online and found a vegan recipe called Wild Mushroom and Diakon Radish Cake.  I’ve never eaten a vegan meal… well on purpose I haven’t!  Vegan gets a bad rap because it doesn’t use anything from an animal – so no meat and no dairy.  But I have to admit this was delicious!  It’s full of flavor and great texture and with the dipping sauce…. Just super tasty!  So let’s get into some of the recipe.  If you haven’t clicked on the link for the recipe…go ahead and do that now.  We followed the recipe pretty exact except for the white flour – we are trying to be gluten free so Instead of using the white flour we replaced it with corn flour.  It’s a great substitute for white flour and it’s super inexpensive.

A quick tip on buying “G Free”.  First off – eating “G Free” is not that hard unless you have a scary addiction to donuts (which we have but we’re being strong!).  Eating “G Free” is excluding wheat, barley and rye from your diet – so no pasta, bread, and…beer.  Aldi’s has an AMAZING selection of “G Free” food – like pasta’s, snacks, and even frozen foods.  It’s super inexpensive and tastes great if not better than the brands your used to – I highly suggest the Live G Free Pretzels!  Also, many people look at the “G Free” movement as a way for businesses to make money off of a trend.  It’s true to a point, anything with “G Free” on the label can be more expensive and the “G Free” aisle has a great assortment that always seems to be about a buck more than what you are used to spending.  BUT…. Many foods are naturally G Free… like the above mentioned corn flour(see super cheap!), vegetables, fruits, oatmeal and meats.  So don’t just look for the words “G Free” when many items don’t have to tell you they are!

So… on to the recipe!  Hopefully you’ve clicked on the link by now.  We followed this recipe with just a few changes.  We added a half cup of water to the daikon while it was “boiling” – though daikon is very juicy… there didn’t seem to be a lot of juice to sustain a boil for 20 minutes.  Also, we didn’t use white pepper… we stuck with your everyday black pepper.  Instead of using a steamer (we just don’t have one) we baked the daikon in a casserole dish for about 30 minutes then cut them into squares and put them in a skillet for browning.  They turned out fantastically like that! 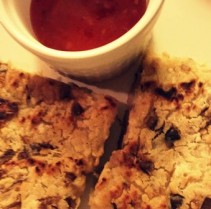 One last thing we changed…. We didn’t make the sauce.  Instead we just used Frank’s Red Hot Sweet Chili sauce.  It brought just the right amount of spice!

We highly recommend this inexpensive dish that made two nights worth of dinner for us!